The Roman Palace at Fishbourne in West Sussex dates from the first century A.D. approximately 30 years after the conquest. The original building was further developed over the next 200 years. The palace is the same size as Nero’s golden house in Rome and follows the plan of the Domition’s Palace. It is in fact the largest Roman residence north of the Alps that has been found to date. It was believed to be the residence of Tiberius Claudius Cogidubnus (aka Togidubnas) a local pro-Roman client King. There is some evidence that he may have been in contact with Rome prior to the invasion of 43 A.D. Some people have suggested that the connection between Rome and this family may have dated back to the abortive missions of Caesar in the 50s BC. This area of Sussex was one of the major staging posts for the Claudian invasion – again suggesting that the Romans knew that they would encounter no hostility in this area and that the locals would be helpful to them. It may well be that funds and craftsman for the Palace were a reward to Togidubnas for his help during the invasion period.

Artists impressions of what the palace would have looked like 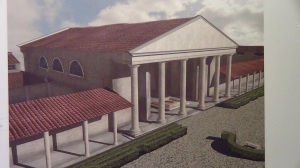