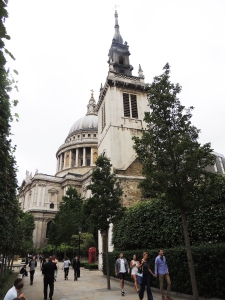 Standing on a site adjacent to St Paul’s Cathedral, the first reference to St Augustine’s is found in the 12th century. The original church was destroyed by the Great fire of London and was rebuilt to a design by Christopher Wren shortly afterwards. This building was destroyed by bombing during the second world war and the decision was taken not to rebuild it. The tower was restored in 1954 and was in 1967 incorporated into the buildings of the new choir school of St Paul’s Cathedral.

The following interesting tale was found on Wikipaedia:

The church cat, named Faith, became quite well known after the air raid which destroyed St Augustine’s. Days before she was seen moving her kitten, Panda, to a basement area. Despite being brought back several times, Faith insisted on returning Panda to her refuge. On the morning after the air raid the rector searched through the dangerous ruins for the missing animals, and eventually found Faith, surrounded by smouldering rubble and debris but still guarding the kitten in the spot she had selected three days earlier. The story of her premonition and rescue eventually reached Maria Dickin, founder of the People’s Dispensary for Sick Animals (PDSA) and for her courage and devotion Faith was awarded a specially-made silver medal. Her death in 1948 was reported on four continents.