Maunsell s15 no 847 was the last of this class to be built. Maunsell had taken the S15 design of Roobert Urie for the LSWR and had modified it to suit his heeds. 847 was allocated to Exmouth depot where it was used on fast goods and ocassional passenger services. In 1951 it moved to Salisbury and then in 1960 to Redhill. It was withdrawn from service in 1964 and sent to Barry scapyard from where it was rescued in 1978 and sent to the Bluebell railway. Its restoration to working order took 10 years.

847 on her way to Bluebell railway
Photo by Clive Warneford [CC-BY-SA-2.0 (http://creativecommons.org/licenses/by-sa/2.0)%5D, via Wikimedia Commons 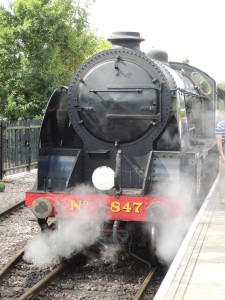