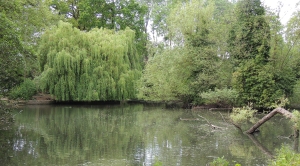 A bright sunny day and a chance to do the weekly butterfly and dragonfly survey on my home patch. It has been a somewhat slow start to the year with sporadic butterflies and just two records so far of Large Red Damselfly (two weeks ago – which was an early date for this site) and nothing since. As I made my way down to the Tarn I found a female Brimstone and then by the pool a Holly Blue.

Approx 6-8 Large Red Damselflies were on the pool and 2 pairs were busily laying eggs. A single Azure damselfly was also present.

This was to be the highlight as the remainder of the walk only yielded a single Green-veined White and a second Brimstone.

The nesting season for birds is well underway and today there were young Coots, Greylag Geese, Canada Geese and Mallard around the Tarn.