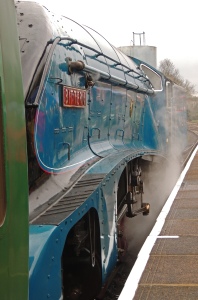 It was fitting that 4464 Bittern should return to Mid-Hants railway since she was restored to mainline order at Ropley works.

4464 was built at Doncaster works in 1937, a sister to engine to the famous ‘Mallard’. In all 35 A4 pacific’s were built and of these 6 remain in preservation. Bittern now carries a plaque commemorating her part in the celebrations of the 75th anniversary of Mallard’s steam speed record.

4464 was initially based at Newcastle and was responsible for hauling the Flying Scotsman express between London and Newcastle. After the second world war she pulled the Talisman express from Kings Cross to Edinburgh. The A4s were replaced on these services by diesel locomotives in 1963 and 4464 went to Aberdeen to pull express services between there and Edinburgh or Glasgow. However 3 years later they were withdrawn from service.

4464 was purchased by a private owner and ran railtours but she quickly developed a cracked frame and had to be withdrawn from service and it was not until 2000 that work began at Ropley works to bring her back to running specification.She returned to service in 2007 and in 2013 she undertook 3 90mph runs as part of the celebrations of the 75th anniversary of Mallard’s record of 126mph in 1938 (as commemorated on her new plaque). Bittern made a top speed of 93mph.