Our journey on the Dartmouth Steam Railway starts at Paignton Station.

The line between Torquay and Kingswear was opened in 1864 and amalgamated into the Great Western Railway in 1876. The line was closed in 1967  and was sold in 1972 to a private heritage company and the first trains ran the following year. 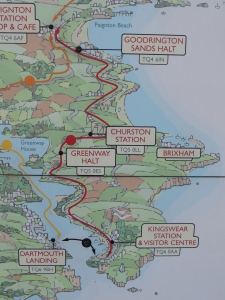 Heading out from Paignton we pass Goodrington Bay

As we travel south we cross the viaducts over Broadsands Bay before arriving in Churston, where passengers for Brixham alight to continue their journey by road.

Turning inland we pass through the long Greenway tunnel before emerging beside the River Dart alongside which we pass before arriving at a stop for Greenway, the former home of Agatha Christie, now open to the public.