The first was about a visit to Oxford when she met up with Lewis Carroll, writer of Alice in Wonderland. She commented that she loved his book and it was arranged that he would dedicate his next book to her. It is not recorded what she thought when in due course she received a copy of ‘An Elementary Treatise on Determinants’. Lewis Carroll was in his everyday life Charles Dodgson, a mathematics lecturer at Christchurch Oxford. Dodgson later denied that this had ever happened.

The second story was similar to the Bath one. Apparently, Queen Victoria was invited to open the new railway station at Newcastle. 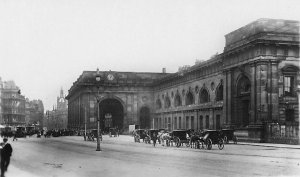 Afterward, the Railway company forwarded the bill for the reception to the Royal Household. This was not well received and thereafter Queen Victoria gave Newcastle Station the Shuttered blinds treatment. I haven’t been able to verify this story so I don’t know if it is true or just an urban myth, but it was told to me by someone from that city.