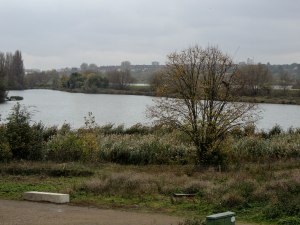 On a cold chilly and somewhat damp morning, Keith and I made our way to east London to investigate the newly opened Walthamstow Wetlands nature reserve. Although Walthamstow Reservoirs (as it was previously known) has been accessible to birdwatchers for a number of years (by permit), the changes in water management has led to a new approach which has opened up the site to the public for more recreational use with the creation of footpaths and the conversion of the old engine house into a visitors centre and cafe. From here we had good views of a Red Fox.

There are many circular walks and Keith and I headed off to the two reservoirs known as East and West Warwick. Her we found a number of species of gulls and duck. As we walked along the side of West Warwick a female Goosander took to the air and flew off towards the visitor centre.  Returning to East Warwick 30 minutes or so later we found that, or maybe a second, female Goosander present.

From the elevated reservoir path, we also saw a pair of Europen Stonechat and witnessed a tussle between a Kestrel and a magpie who both wanted the same perch.

Crossing the Coppermill stream, past Coppermill Tower, which when open will give views of the entire reserve, we were surprised to see a Mallard with 13 small chicks, which could not have been more than a week or two old. Very late breeding – Witness once again to the mild autumn that we have had in London.

Making our way back to the visitor centre between No5 and No 2 reservoirs we found a female Goldeneye on No 5 and a number of Great Crested Grebe on No 2. By now the rain had begun to settle in for the afternoon and so after a warming cup of tea, we decided to forgo a walk around the northern section of the reserve which contains a further two large reservoirs and head for the station and home.

A wonderful introduction to a new jewel in Londons natural habitat, I expect it will not be long before we return.