Completed in 1937 this was the 100th Gresley designed Pacific locomotive to be built. It worked its life on the East Coast mainline and holds the post war steam speed record of 112 mph set on 23/5/1959. This was achieved over the same stretch of track the Mallard had used for the world record run pre-war, but the difference was that 4498 was pulling a full passenger train. It was withdrawn from service in February 1966 and sent to Crewe for refurbishment as it had been purchased by a preservation trust. Following this it was used to run railtours out of Steamtown at Carnforth. In 1994 it transfered to Great Central Railway and also did a spell at the East Lancs Railway before being based on the North York Moors railway. In 2012 it took part in the Olympic torch tour of the UK. 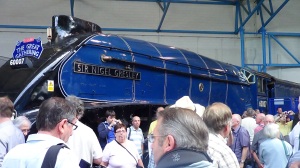